It's one of a situation when you are surprised by an unexpected gesture by a friend. 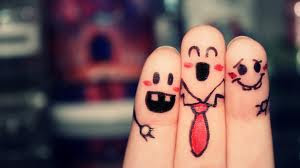 There was a boy and his friend, both of them were childhood friends. They started their schooling together and even their parents are like families. But still friendship between the two is the bond which they share.

The boy although considered him (the friend) as his best friend, but some where had a feeling that he might loose his friend in the crowd. This was the same with the friend. And hence, they never expressed themselves.

Time passed by and they both moved to different places to settle in their in life.

Once it happened that the boy was on a official trip and he had to transit through a city nearby to his friends city. He gave a random call to his friend if he would be free to meet him and catch old times. The friend agreed.

On the day, the boy was eagerly waiting to meet his friend when he saw his friend with luggage in his hand. His friend on asking told him that he was too scheduled to go the same city where the boy was supposed to go and as he had to meet him (the boy) as well so he rescheduled his flights from the boy's transit city rather than to travel from his own city.

This was the moment of the unexpected surprise and all this made the boy as well as the friend realize how deep their friendship was, that even though they are away they still have great regards for each other.
Posted by Unknown at 4:53 PM